How to Write a Good Design Brief for a Creative Project 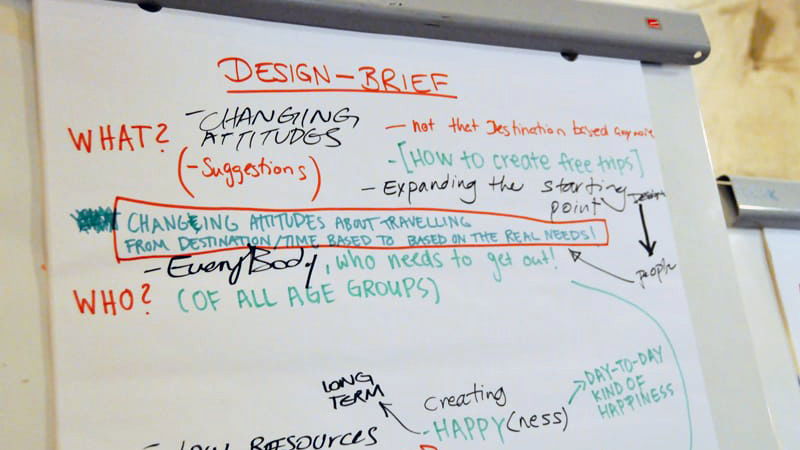 In my fifteen-plus years a s a working creative, the biggest sticking point of most projects has always been the design brief. No matter the sector, no matter the client, the single determining factor as to whether the project will yield a good result or not, is getting it right from the start.

There are many articles across the web that will attest to this – in fact with so much insightful and well-written articles about design briefs out there, it’s a wonder that I see so many ineffective ones.

However something else to consider, is the idea that it’s part of the designer/creative’s task to bring out the best brief from the client. The onus is never fully on one side or the other. A good creative will interrogate a design brief. Sometimes the real brief doesn’t emerge until I’m a quarter-ways into a project.

And that’s problematic – when the early stages of the project are given over to simply getting to the bones of the problem, this has a causality of time and resource. Projects take longer, creatives charge more, and everyone becomes somewhat jaded at how arduous the task has become.

Though as a client, you may feel interpretation and instinct may be part of the service you’re paying (handsomely) for, you will find much to your chagrin that vagueness is an added tax.

Often I will insist clients write a design brief in the first instance, as opposed to discussing the project over in a meeting or over the phone. This is because the mere act of writing forces us to distill our ideas. Writing is a process that encourages us to process. Ultimately no one can know your business as well as you do (at least from your perspective), so lay a good foundation from which a designer can build on your ideas.

With that in mind, follows is a guide from a creative standpoint, in how to write an effective, comprehensive and inspiring brief.

– What is the project in one or two sentences?

The general rule of thumb is, if you can’t explain it in a sentence, you probably don’t understand it well enough.

This seems like a fairly obvious one. Yet in my experience it’s barely ever mentioned. Especially when working with big brands, people have a tendency to assume you know their business as well as they do. But what can be more important than ‘what do you do’ is ‘why do you do it?’. This can give insight into values, drivers, and a sense of what really matters.

Be realistic about this point. This section shouldn’t read like a wish list, it should be based on similarly-orientated organisations who operate in the same space – or fairly close to it. Perhaps you’d like to imagine yourself on a par with Nike and Apple, but this is probably not the case – they already write good briefs.

– What do you want to happen?

Again, this point calls for level-headed pragmatism. Typically when I ask this point the knee-jerk riposte is akin to ’be a millionaire’/’sell all the things’/’land all the clients’, but again these are wishes, not goals. A goal in this case is something potentially attainable. Something within the realms of possibility.

This is not to say the goal is the be-all and end-all, but they can be a yardstick by which we can measure the effectiveness of our efforts. A good goal might be, ‘to increase customer sign-ups by 25%’. Or, to ‘drive up sales by X amount’. But even if your goal is not as specific – let’s say you want to just increase awareness about an event – try to figure out a mechanism to quantify the outreach.

– How does it need to be delivered?

Be specific as possible about what the physical deliverables are. Do you just want concepts or printer-ready artwork? If it’s a campaign, how many formats or iterations will you require? If it’s branding, detail how you need the logos – CMYK/RGB, vector or web? Feel free to list away, employing your fanciest of bullet-points as need be.

‘As soon as possible’ is a common response I’m fairly used to, but understand this is not ideal practise. This comment isn’t really related to the design brief itself – often a short turnaround is unavoidable – but considered planning with get a considered effort. Factor in ample opportunity to write a design brief and get it to your designer in good time.

As someone who’s visited the souks of Marrakech, I appreciate that everyone loves to haggle (except perhaps the people selling, and me). I also get that no one wants to pay more if they can pay less, but vagueness in this department just incurs more time and deliberation. Before engaging a designer or creative, you really should have a solid idea of where your budget is at. Just put down the number your are most comfortable with – there’s always room for haggling (I’m told).

It’s always helpful to get a sense of who I’ll be liaising with, who will be doing the approving, who will be sending me copious rounds of revisions into the night, who has sign-off (and who’s paying the bill). I’ve lost count of instances where this assumedly vital information was just assumed, and it’s been left to me to figure out the identities behind the dozen feedback emails I’ve just been CCd in.

Now this by any means is not a comprehensive list – as stated initially there are a wealth of good-brief materials available at your very fingertips. I would heartily recommend the Design Council’s ‘How to commission a designer’ series, featuring practical tips, advice and checklists for businesses investing in design. Check it out here.

Ultimately writing a good design brief is an act of consideration and respect – both for your creative partner as well as your company. It demonstrates your own investment in your enterprise, and the will for it to succeed by providing a solid framework. This isn’t to say the project won’t be without it’s challenges nonetheless – any creative journey is one of peaks and valleys – but at least you’ll be heading in the right direction.