Advice For A Young Graphic Designer 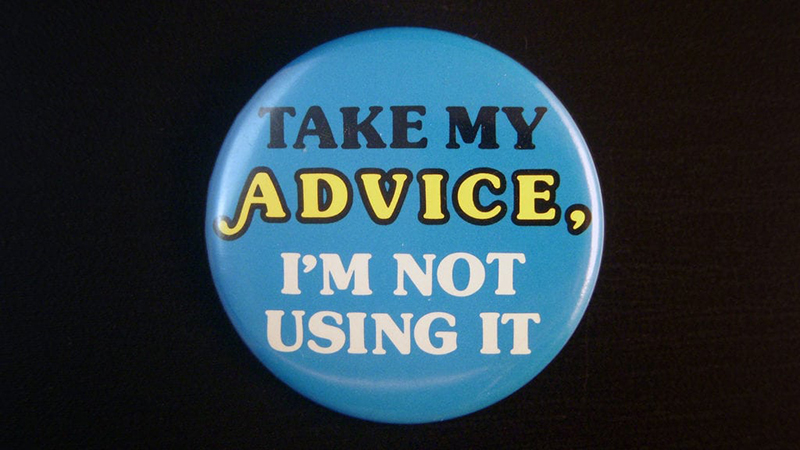 I recently enlisted the help of a young graphic designer for a contract, and as a ‘senior’ designer I found myself offering bits of advice here and there. From how to approach a new project, to finding one’s feet in an industry many say is on the decline. So in this post I’ve attempted to crystallise some of these thoughts into a few points that may be of benefit to young creatives, or indeed a creative at any stage. This is far from a comprehensive list (I do actually have work to do), but it could serve as a good start. As you’re no doubt aware, the internet is awash with helpful resources for getting ahead in the creative industries, so just consider my incoherent rambling a point-of-view rather then a definitive guide.

1. Don’t listen to any advice

Seems a curious place to start an article about advice, but this is an important one. Bad advice can derail you, especially if you’re just starting out in graphic design. Bad advice can set you down the wrong path, costing you precious time, energy and resource. Throughout your career there will be senior designers, art directors and creative directors who will shove their wonderfully subjective advice in your face, often with little to no provocation. Beware! These guys LOVE talking about themselves, and will grab any opportunity to bestow their infinite wisdom upon your young and impressionable ears. But you should understand that such advice is entirely subjective. Every brief, client, job and project is completely different. What worked for them on some pitch 12 years ago, will not necessarily work for you now.

Now I’m not really saying you should ignore all advice, but be very selective in who you seek it from, and cherry-pick from what you hear. If you’re lucky enough to find a potential mentor who is doing the exact thing that you want to do – great work in an inspiring and exciting context – then that’s someone you want to hear from. If a creative at an agency you’ve never heard of, with clients you don’t want to work with, in an industry you have no interest in wants to critique your CV font choice, that’s not someone you want to hear from.

One of the hardest things you’ll find as a graphic designer, is being boxed-in. Historically graphic design (and many other creative roles) have been taught as general practise, giving students a benchmark set of visual communication skills which then can be applied to various disciplines and sectors. In recent years this has become fragmented, with many design roles being taught and recruited as specialisms. The problem is now though general creativity is now considered essential to every business, the role of the graphic designer in many sectors is in decline. Add to this crowdsourcing, accessible authoring tools, and an oversaturated creative marketplace.

This has resulted in more roles calling for a broader set of skills and experience. What this means ultimately is businesses are now looking to get more out of creatives. After been told to specialise for a decade, now you’re expected to do it all (or at least enough of it). It’s not uncommon to see a post seeking a graphic designer with coding experience, whereas previously these may have been considered two distinct roles. The challenge here is as a young designer, you may have less choice in what projects or jobs you want to chase. So a way to surmount this is to build a tailorable portfolio. If you have experience of b2b, hospitality and environmental graphic design, you should have 3 separate books, and perhaps one general book. This is easy enough with a filterable online portfolio, but you may need a print counterpart too. I’ve presented my work in hundreds of meetings, and find that prospective employers or clients still gravitate towards a printed portfolio. So even if you’re presenting off the screen, have something printed to leave behind.

Being a graphic designer is a bit like being a Hollywood actor, except for the lack of money, adulation and money. But like an actor, designers are perceived to be as good as their last hit. Unlike actors, we typically won’t have bullish Hollywood agents to do our selling, so we have to do it ourselves. And this is all about selling. Selling clients on your ideas, selling colleagues on your direction, selling customers on your solution, selling employers on your prospects. So whatever you’re working on right now, is what you’ll have to sell in the future. Anything can be sold, but some things are an easier sell than others, so you may need to up the odds in your favour. If you’re working for a mediocre agency, doing mediocre work for mediocre clients, you’re going to end up with a mediocre portfolio and a helluva lot of selling to do. This isn’t said to belittle or disparage anyone – doing great work is increasingly difficult these days when everyone has a bootleg copy of Photoshop and a Mad Men box set. It requires a certain type of client and creative relationship which unfortunately, is few and far between.

The point is if you’re a graphic designer working on Nike or Apple, that’s an easier sell in a meeting purely down to context and brand awareness. When you have to sell a b2b marketing campaign for a local bathroom business, the context is less established and it becomes a harder sell. To illustrate, once I presented a portfolio of b2b, hospitality and corporate work to an agency. My work had several brands in those respective sectors, and some award-winning work in there but of course no Nike or Apple. After about 2 minutes the managing director abruptly interjected with ‘haven’t you worked for any real brands?’, 3 minutes after that I was at the front door.

So, if you find yourself with a body of work that might be somewhat below the radar – that’s fine. Here’s what you do. Gather as many metrics as you can. If you’ve worked on something successful, for example in retention rate, number of clicks, sign-ups, reviews, romantic propositions or just general feedback, get it all. The numbers will go a long way to giving your work gravitas, meaning and context.

As a creative you should always be on. Every day you should be looking at the entire world as a visual communicator, irrespective of whether you have any paid client work to do. If you’re sat in a restaurant looking at an uninspired menu, design a better one (do it in your head unless you actually go to dinner with a Macbook). Our world is swamped with graphic design, and though we’re not always privy to the context in which each communication was created, we can still interact and engage with it. It also serves as another way of beefing up your book, by supplementing your client work with personal projects. This is your opportunity to show flair and creativity and ingenuity, but try to keep it in the same ball park as whatever sector you’re aiming for. So if  you’re wanting to work in music, go and design some flyers and posters for your friend’s awful band. Over the years I’ve found it’s the personal work that really pushes you as a designer. I’ve been asked on occasion about writing briefs for yourself, in order to make it more ‘real’, but I don’t think this is necessary. Design is about solving problems, and there’s plenty of them around if you look – you should be thinking like a graphic design entrepreneur rather than just a graphic designer. Though it might seems as a bit of a folly, this approach has led me to some of my most prolific and lucrative projects.

So that’s all for now. As I said there’s countless resources which are no doubt more insightful than my meanderings out there, and I’ve listed a few starting points below. If any of this has been of any help (or not), please leave me a comment below. Now, go off and remember to not listen to any advice.

AIGA, the professional association for design
HOW
Clients From Hell
Design Council
CreativeBloq