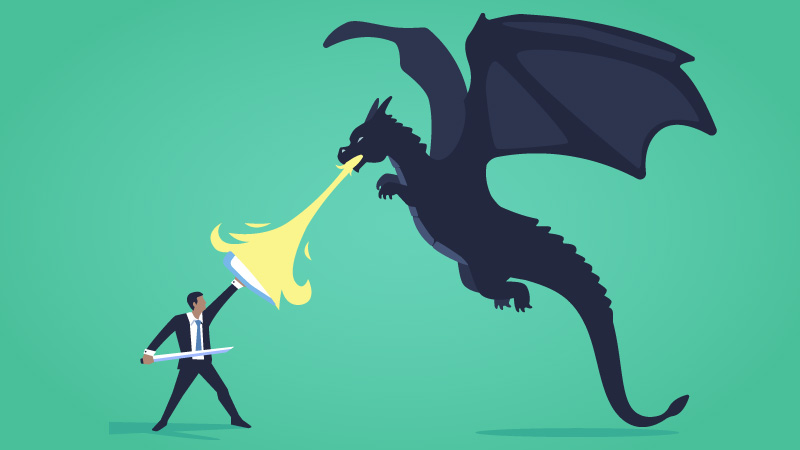 Spoiler alert – this post refers heavily to the events in Game of Thrones, season 6 episode 5. If you’re one of the few people on the planet who hasn’t seen it yet, then maybe give this post a miss.

Yes, you read that right. And if indeed the headline of this article has left you puzzled, allow me to expand on what a TV show about dragons and knights, can teach us about business, marketing and entrepreneurship.

This will be the first in a series of posts, where I crash the world of sweary fantasy, right into your corporate manifesto.

So Game of Thrones is well into it’s final season, and though the show is arguably muddled of late with script and pacing issues, it’s place as an iconic cultural phenomenon is well assured.

However, the reasons for why it resonates with popular culture quite so much, are a little more elusive. There are lots of storytelling tropes we’re familiar with – messianic prophecies, tyrannous rulers, and epic battles in front of castles, to name a few.

To add to this, there’s a faint whiff of familiar history. Author/train driver cosplayer George R. R. Martin took the grisly feuding of 15th-century England’s dynastic civil wars – dubbed the ‘War of The Roses’ – as inspiration for the warring factions in fictional Westeros.

But after watching the penultimate episode of season 6, titled The Bells, I’m wondering if some of the plot lines and story arcs of these beloved characters, can deliver the sort of business wisdom typically reserved for Three-Eyed Ravens.

So I’m going to break down a Game of Thrones plot point, give an analysis of what’s going on, and what lesson we can gleam from it in terms of business.

Note: none of this will make sense unless you’ve watched the episode. And still might not if you actually have – but like Brienne said to Jaime – stay with me.

Lesson 1 – Game Theory, Or How To Make Sure You’re Playing The Right Game

What happens in the show:

The combined forces of the North and Queen Daenerys Targaryen’s troops prepare to attack King’s Landing.

Queen Cersei Lannister has hired 20,000 fighters of The Golden Company – a massive army-for-hire from Essos – to defend King’s Landing but most importantly, her.

Tyrion Lannister makes an impassioned plea to Daenerys, to spare the lives of thousands of citizens if he can convince his sister, Cersei to surrender. Daenerys begrudgingly acquiesces.

Tyrion says that the surrender will be marked by the sound of bells tolling in King’s Landing (hence the title of the episode).

The attack begins. Daenerys and her remaining dragon Drogon promptly turns Cersei’s defences – and most of the Golden Company – into the worst barbecue ever.

And as Tyrion hoped, the bells indeed toll. Yay!

Only…. Not. Even in the face of victory, Daenerys decides Cersei’s surrender isn’t enough. She elects to make the whole thing super-personal, and on a whim decimates almost every living person in the city.

In making the battle personal, Daenerys is playing a finite game. In game theory – the science of logical decision making in humans, animals, and computers – describes two models – finite and infinite games.

A finite game can be best described as:

“Finite games are those instrumental activities – from sports to politics to wars – in which the participants obey rules, recognize boundaries and announce winners and losers.” – James P. Carse (Finite and Infinite Games)

Finite games are well, fine, as long as all the parties are playing the same game. When everyone is obeying the same rules.

But in business, this is typically not the case. Most companies are playing by totally different rules. But failure to recognise this, leads to poor decision making.

For example. Brand A wants to be the leading computer company in the district. But what constitutes Number 1? Is it sales? Brand recognition? Customer loyalty? Number of stores?

What are the terms for competing for the Number 1 spot? If Brand A are number one for a day, do they win? Or do they need to be Number 1 for a year? Ten years? Forever?

Meanwhile, contrast this with their competitor, Brand B.

Though they make the same product, Brand B aren’t focused on being number 1. Their mission is to constantly innovate the market. Brand B are playing an infinite game.

“The infinite game – there is only one – includes any authentic interaction, from touching to culture, that changes rules, plays with boundaries and exists solely for the purpose of continuing the game.” – James P. Carse (Finite and Infinite Games)

If all parties are playing the same game, with the same rules, then everything is stable.

Beat Around the Apple Bush

In the previous example, though both companies are competitors, only one is behaving like one. This example can be exemplified by Microsoft and Apple.

For years Microsoft were obsessed with topping Apple. Reportedly a Microsoft summit some years ago, revealed presentation after presentation on ways to ‘beat’ Apple.

Yet Apple are playing a different game (with the exception of those ‘Mac Vs PC’ ads I guess?). Apple’s game is to impact culture. Their goal is not to be Number 1. Their goal is to continue the game.

And that’s why they win. Consider this excerpt from Apple’s Corporate Vision Statement:

“We believe that we are on the face of the earth to make great products and that’s not changing. We are constantly focusing on innovating…”

This is not to say such companies don’t actively compete in one or several ways, nor that a business focused on short-term goals is necessarily bad, but the point is about orientation.

Those playing ‘small ball’, will likely be survived by their infinite-game competitors. They’ll always be playing catch-up.

One Is The Loneliest Number

Back to Game of Thrones, and like Brand A, Daenerys’ wants to be Number 1. She is hell-bent on ‘reclaiming’ the Iron Throne and ruling the Seven Kingdoms.

Not because that might be a good thing for the people of Westeros, but because she feels it’s her birthright – she’s owed.

And this motivates her to make rash, in-the-moment decisions. Decisions governed by the game playing in her head.  “I will take what is mine with fire and blood.”

Jon’s campaign against the Night King was a perfect example of this principle. While Jon sought to continue the game for all of humanity (infinite game), Cersei refused to play, and took her ball (in this case the entire Iron Fleet) home.

But even cold-as-ice Cersei’s motivation stems from a desire to protect her family – if only by keeping them on top in the Red Keep.

So with Daenerys’ blisteringly rapid descent into mad-Queendom, her lack of vision (and a lot of foreshadowing by the Game of Thrones scriptwriters), sets the stage for an inevitable downfall.

– Examine and make a conscious decision on what game your business should be playing.

– Consider and build your values, to orientate yourself to this goal

– Don’t overreact to what your competition is doing

– Try not to burn your competitors with dragonfire

Next, we’ll examine Cercei’s unwavering faith in salary as a motivating force, against being burned alive.